Among the great breweries, movie theaters and local hiking options, you’ll find plenty of places to take pictures in Portland. If you know where and when to look, you’re sure to come away with some stunning images no matter your level of photography expertise.

So, lace up those boots, zip your raincoat and make a day of this scavenger hunt of the best places to take pictures in Portland.

Located in north Portland’s historic St. John’s neighborhood, Cathedral Park offers the perfect angle from which to shoot St. John’s Bridge. Portland is also known as “Bridge City,” and there’s no shortage of them.

But this steel suspension bridge’s bright green color, unique Gothic architecture and massive scale make it the crown jewel across the Willamette River. The bridge looks just as picturesque in any lighting, but you’ll want to visit in the daytime to enjoy the peaceful riverside park.

Portland is full of amazing street art, which is always a great subject for photography. Typically, it comes down to personal preference, but there are no murals more grand or captivating than Irish artist Fin DAC’s piece Attitude of Gratitude on the southwest side of the Sol Terra building just west of Portland’s Ladd’s Addition neighborhood.

At 70 feet tall, the sheer scale of the piece is captivating. But if you look a bit closer, the hair of the woman in the mural is actually made of over 1,000 living plants affixed to the side of the building, giving it a distinctive three-dimensional element that’s sure to stand out in your photos. 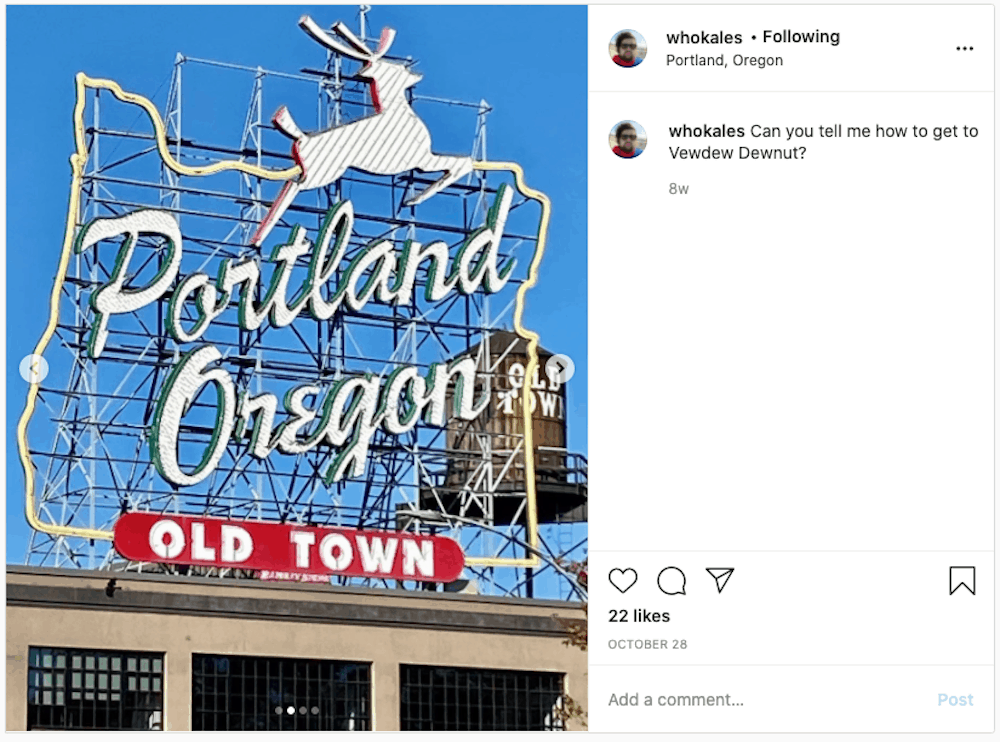 Known simply as “The Stag,” this glowing roadside sign has become an infamous landmark that sits atop of a building in downtown Portland’s Old Town district. Originally an advertisement for White Stag Sportswear, it was purchased by the City of Portland in 2010 and redesigned as part of a tourism initiative and became one of the most recognizable parts of the city skyline.

At night, the neon lights and incandescent bulbs flash, blink and shine in an alluring pattern, while in the winter, the stag dons a festive red Rudolph-inspired nose. The best clear shot at the sign is from the sidewalk of the adjacent Broadway Bridge.

Known affectionately as Portland’s Living Room, this 40,000-square-foot city block is a dedicated public space constructed of lots of red brick, lined with trees and surrounded by historic buildings in the heart of Downtown district. There are delicious food carts on site and plenty of room to relax among the bustling city all around it, making this an ideal location for people watching.

However, the square’s biggest draw is the more than 300 events held annually, from live music and art installations, to beer festivals and tree lightings, making Pioneer Courthouse Square a perfect backdrop to photograph the action.

Speaking of city blocks, Powell’s City of Books takes up one in its entirety in Portland’s Pearl District and holds more than a million books, making it the largest used and new bookstore in the world. The building’s huge, iconic marquee on the corner of West Burnside Street and NW 10th Avenue has a welcoming glow that’s an image of Portland at its essence. Take a trip inside and browse the multiple floors, grab a warm drink from the cafÃ© and be sure to snap a pic on your way out.

Standing at the intersection of West Burnside Street and NW Fourth Avenue is a nearly 40-foot-tall, traditional Chinese paifang that serves as the entrance to downtown Portland’s Oldtown Chinatown district. The gateway was a gift to the city of Portland from the Chinese Consolidated Benevolent Association, which installed it in 1986. It’s only a couple of blocks from a certain infamous Portland doughnut shop, so go get yourself something sweet after you snap your shot. 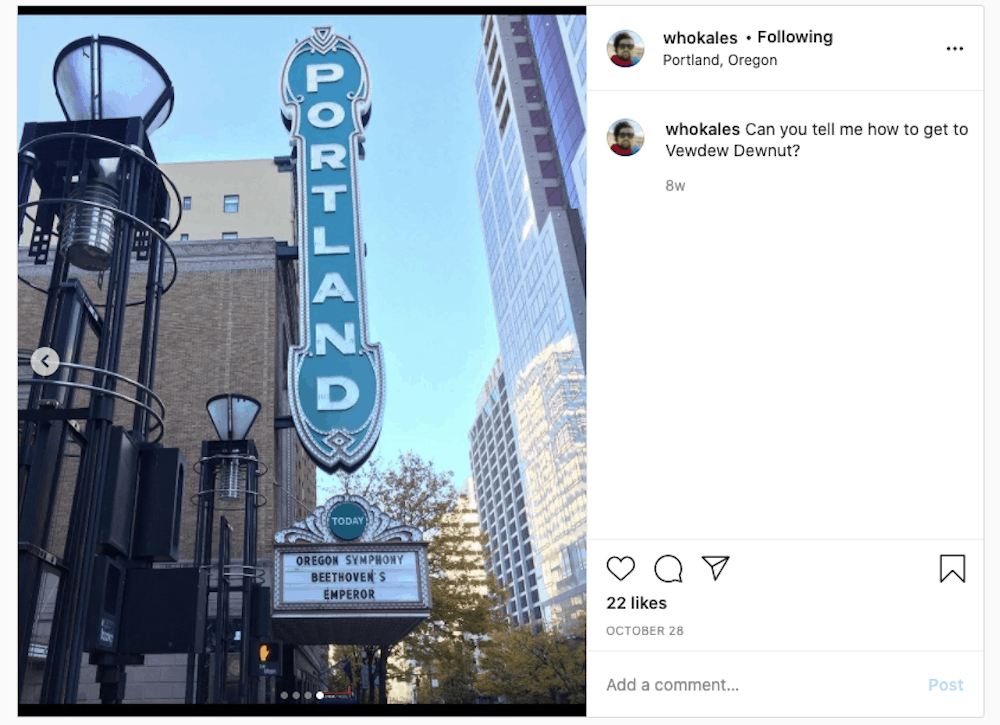 Arlene Schnitzer Concert Hall, a.k.a. “The Schnitz,” is a historic performing arts center and theater in the heart of downtown Portland. The enormous, 65-foot-tall sign affixed to the front is a sight to be seen any time of day, but at night it shines gloriously and nothing says Portland like a giant glowing sign that literally says “Portland.”

If you have a chance to attend an event, the inside of the theater is even more magnificently designed with lavish architecture that will make you feel fancy on a night out.

The mighty Multnomah Falls are well worth the 30-minute drive east of the city through the scenic Columbia River Gorge. At more than 600 feet tall, this natural wonder is truly awe inspiring. You can get a great view from the lower deck, or get up close on the pedestrian bridge to capture the perfect angle.

This attraction does draw a crowd, especially on the weekends, so a less popular time is advisable. Visit the lodge for more information on the area, the quaint gift shop or a meal at the restaurant.

At more than 1,000 feet above sea level in the Southwest Hills area, Council Crest Park is the highest point in Portland, providing it with some unparalleled viewpoints. From this park perched high in the hills, you can see five different mountains of the Cascade Range, a great view looking east over the city and several surrounding suburbs.

Fun fact: There used to be an amusement park here that was in operation from 1907 to 1929. The park has an interesting history you can read about on its plaques when you visit â bring a picnic to make the most of it!

For an up-close and personal view of the city skyline, head down to the water. While the west side’s Waterfront Park may be more scenic, the Eastbank Esplanade looks west over the water at the city itself, giving it a much better view. The Esplanade is a 1.5-mile bike and pedestrian path that runs along the Willamette River. Not only is it a great spot to get some exercise, but the views are worth the visit.

It’s also a great (but popular) spot to watch fireworks on New Year’s Eve or the Fourth of July, and the annual Winter Light Festival features illuminated installations along the river that make for some great photos.

Portland is a beautiful city that loves the camera on cloudy days, sunny afternoons and starry nights alike. For those with an interest in photography, there are an abundance of great places to take pictures in Portland.

If you follow this guide, you’re sure to come away with some awesome additions to your social media pages and some tasty treats along the way!

The post The Best Places to Take Pictures in Portland appeared first on Rent Blog.